Google on Brillo at the I/O 2015 developer conference

Google made a formal announcement on Brillo at the I/O 2015 developer conference.

Key takeaways:
• Project Brillo is the name of Google’s platform that links objects from thermostats to washing machines to each other and to the web
• Brillo is an embedded OS accompanied by core services and a development toolkit
• Weave is a device-to-device communication protocol developed by Nest, and later acquired by Google
• Weave is a low-power, low-bandwidth, low-latency, secure, device-to-device communication protocol that was developed and used by Nest for their devices.

What is Thread & Weave:
• Weave is a protocol for IoT devices
• Thread is an IP based wireless networking protocol designed for low-power connected products in home automation space
• Weave is neither a competitor nor a new version of Thread. Weave is an open standard protocol proposed by Google for entire IoT spectrum. Thread is only for home automation scenarios. 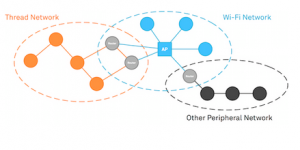 Nodes in a Weave network receive each an IP6 address and can communicate with each other even though they belong to different physical networks.

Apple’s take on IoT:
HomeKit is a similar IoT solution but it comes with a different approach. Apple’s system uses the proprietary HomeKit Accessory Protocol (HAP), it will have limited interconnectivity; this is a closed-source project, and every single IoT device will have to be Made For iOS (MFi). Not just the software development process is centered around Apple’s tools and need to follow strict certification rules, but for security reasons device manufacturers have to use Apple-approved controllers, such as Marvell’s EZ-Connect.