The hottest discussion Lumia and Motorola

Nokia’s Lumia 920 is referred to as the “flagship” for the new Windows Phone 8 operating system.

Side by side Motorola’s Droid Razr M has come up now.

Is this intentional or accidental? Both the product events took place on the same day, the flame is getting bigger and bigger. Lumia’s range is somewhat bigger but DROID RAZR HD is a hot phone too. This hype of Nokia is because the marketing strategy is appreciative on the other hand we cannot forget one more product by Motorola Droid Razr M 4G LTE.

Closing words from Elop its time to switch to Lumia, but is it? Because we also have the new Motorola mobility. 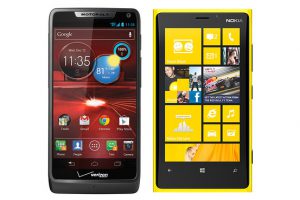 More to tell about Lumia and Droid Razr M,

The PureView camera technology is the eye catcher for attracting the customers towards Lumia 920.It’s being heard that Lumia 920 is more solid than iPhone 4S.

Its freshly announced Motorola Droid Razr M has the large, full display that many customers want for viewing video, reading, and surfing the Web.

Motorola found that consumers who wanted a smaller device tended to go with last year’s model, sacrificing processing power for a handset that can actually fit in their pockets. The company’s answer? The Droid Razr M goes against the grain of larger and larger phones with its unique edge-to-edge display; there’s just a small gap that frames the screen and gives grasping fingers something to hold onto.