The Figures behind the Mobile Apps

The facts and figures behind the apps are surprising. Apps are where mobility lies and it is changing the world by its own means. As the Journal has now started a new series about business strategies related to apps, identifying the losers and the winners is going to be easy. 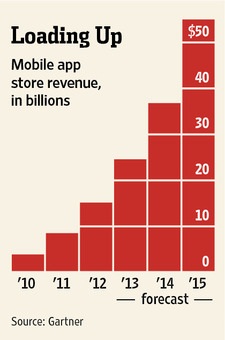 The last week research by Gartner indicates that the global apps business is going to make $25 billion revenue this year, which is lots of money, 62% up from last year.

The numbers itself indicate how the markets are booming and so are the numbers of Apps on a rampage day by day.

are quite a number. There are new segments of Apps evolving day by day and so are the markets changing. The Apps that have been the most used a year ago are altogether replaced by a different set of Apps. With cut throat competition the latest and the best Apps make their way, also the free apps and paid apps make quite a difference. It is like people do mind spending money, unless and until the App is tried and tested. Like for eg, Disney’s & Imangi Studios Temple Run is the highest paid app today. Also, on an average Apple has more paid apps compared to other App stores. According to Flurry Analytics, on an average a smartphone user spends two hours a day on apps which is double the time measured two years before. Ain’t you astonished as in from where did we get that free time? It is like the time spent on web surfing and watching TV is constant while that for Apps is increasing.