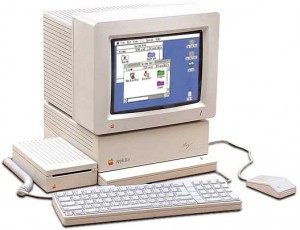 The IIGS was the continuation of the earlier Apple II computer line, Released on Apple’s 10th anniversary. It was designed to be backwards compatible with Apple II software and hardware. The first 10,000 Apple IIGS computers (GS = graphics + sound) have the signature of “Woz” on the front. Woz is Steve Wozniak, who single-handedly designed the first Apple computers, the Apple I and the Apple II. The IIGS CPU even has built-in MOS 6502 emulation, which is the CPU in the Apple II line of computers. The IIGS was the first Apple computer system to utilize the Apple Desktop Bus (ADB). The ABD is a low-speed bi-directional serial bus that connects input devices, such as keyboards, mouse devices, and graphics tablets to the IIGS.

It was later incorporated into the Macintosh line of computers, from the Macintosh II and up. ADB was eventually phased-out in favor of the more standardized USB (Universal Serial Bus) in the late 90’s. As the Apple with the best color graphics, the IIGS also has the best sound. It utilizes an Ensoniq sound chip, which has an entire 64K of RAM dedicated to it and is capable of playing 15 simultaneous sounds. 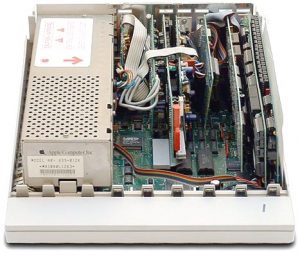 Ever since the Macintosh in 1984, Apple has focused on making small computers, sometimes too small. Few computers cost as much as a IIGS, while having no built-in floppy drive or other type of data storage.

The IIGS has a GUI (graphic user interface) in 16 colors (up to 4096 colors in special graphics modes), a slow but powerful 16 bit CPU, great sound, and was loved by Apple fans everywhere. Sounds like a success – but by this time Apple was spending all its time and effort marketing the Macintosh line of computers, and the IIGS died a slow and uneventful death.