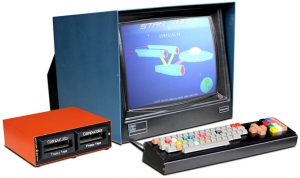 Developed by Intelligent Systems Corporation (ISC), ISC was started in 1973 by Charles A. Muench.

Prime focus of the company was to develop a color computer graphics terminal which will compete with the mechanical Teletype and monochrome terminals commonly in use at this time.

Their initial product was the Intecolor 8001 professional intelligent CRT terminal – a $1,395 kit to be assembled by the purchaser, featuring a huge 19-inch RCA delta-gun CRT. The system came with 4K of RAM memory as standard.

The Compucolor 8001 was an expanded, stand-alone micro-computer with built-in BASIC programming language.

The Compucolor 8001 had three modes of operation:

When first turned-on or RESET, The 8001 came up in CRT Mode, for two-way communication with another computer system via the RS-232 serial port. This was how most standard computer terminals of the day operated.

Intelligent Systems Corporation  (ISC) president Charles Muench stated that he himself analyzed the Microsoft BASIC programming language developed for the MITS Altair 8800 computer, and “reversed engineered it” for use in his Compucolor 8001, but eventually “purchased the BASIC source code from Microsoft so that we would be legal”. In 1978 Intecolor released their Compucolor II – a cheaper all-in-one personal computer designed for the consumer market.