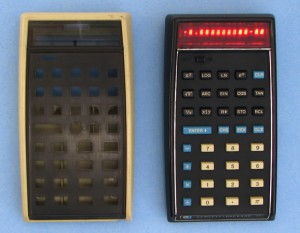 Based on marketing studies done at the time, the HP-9100 was the “right” size and price for a scientific calculator. The studies showed little or no interest in a pocket device. However Bill Hewlett thought differently. He began the development of a “shirt pocket-sized HP-9100” on an accelerated schedule. It was a risky project involving several immature technologies. HP originally developed the HP-35 for internal use and then decided to try selling it. Based on a marketing study, it was believed that they might sell 50,000 units. It turned out that the marketing study was wrong by an order of magnitude. Within the first few months they received orders exceeding their guess as to the total market size. General Electric alone placed an order for 20,000 units. As a result, they later had to warn people to expect waiting lists in the Hewlett-Packard Journal. This was an unusual situation for HP. While many companies advertised calculators months or even years before you could buy one, HPs were normally available the day the first advertisements appeared.

The early versions said only “Hewlett Packard” on the faceplate and inside HP the product was simply called “The Calculator”. Bill Hewlett suggested naming it the HP-35 because it had 35 keys. Later as HP developed more models, “35” was added to the faceplate. The HP-35 and probably the entire HP pocket calculator product line was the sole result of a visionary CEO who chose to ignore the market studies and produce what he felt that engineers would want. His view of the market was that if the engineer at the next bench liked it and thought it would make his job easier, then it was worth doing. The HP-35 was developed in two years, at a cost of approximately one million dollars with twenty engineers. At the time, three to five years was a typical HP development cycle.

The 35 had no true shift key. It did have an “arc” key which inverted the sin, cos, and tan keys. The true shift key was first introduced on the HP-80 business calculator.

This was probably the only HP pocket calculator with a clear everything key. It was prominently located in the upper right corner and probably made adding machine users feel comfortable. This feature was dropped from the HP-45.

The HP-35 allowed the user to press the CHS sign before or during number entry. If a number was in the display as a result of something other than digit entry, pressing CHS negated it, but if the CHS key was then followed by a digit, the calculator assumed the CHS was actually meant for the following entry. Thus the previous number displayed was pushed onto the stack without the (already displayed) sign change. This feature could be confusing and later models required the CHS key to be pressed after the first digit of a number.