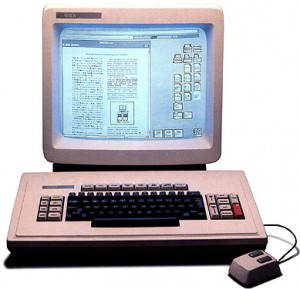 The 8010 Information System from Xerox was the first system to use a fully integrated desktop application suite. Initially the term “Star” referred to the application and desktop software. However the system as a whole became commonly known as “The Xerox Star.” The software was later renamed to “ViewPoint”, and later renamed again to “GlobalView.”

Development of the Star started in 1977 with early development machines, codenamed Dolphin and Dorado, that could also run the Alto software. The final result was completely new software written in Xerox’s MESA programming environment rather than BCPL, which the Alto software was written in. (BCPL even used different microcode) The final 8010/Dandelion hardware was not backwards compatible with the Alto.