The global mobile industry is witnessing unprecedented & incremental growth for last couple of years. With the Smartphone revolution along with mobile technology and improved infrastructure has allowed people to utilize their mobile phones better than before. This has resulted in an exponential demand and growth of mobile applications.
It is expected that the market for mobile applications will be “as big as the internet”, peaking at 10 million apps in 2020. Entrepreneurs are focusing a lot on mobile apps. As the mobile app stats in India states that 100 million apps are being downloaded in India every month. India’s app developer base is estimated at 250,000.
At the 2nd Annual Mobile Apps 2013 held in Bangalore on 30th August 2013, various eminent personalities like Ochintya Sharma – VP at Samsung India, Lux Rao – CTO Technology Services at HP, Vineet Durani – Director of Windows phone business group at Microsoft, Anand Subbaraman, Senior Director of Product Strategy at Oracle along with key decision makers across the mobile application eco-system from enterprises, developers and vendors come together under one roof to discuss on various themes revolving around an era of revolutionary mobile apps and how mobile apps are forming a key part of marketing strategy for every organization. 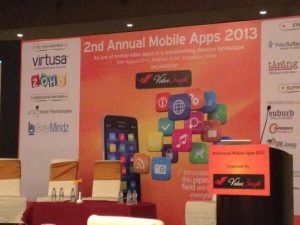 Prime Partner for the event

Our co-founder Mr. Abhijit Junagade, as an eminent panelist, would be speaking on how Winjit Technologies has been growing as an IT unit and how developers can successfully monetize the multi platform landscape.
The mobile applications market has taken new role in defining the marketing strategy of businesses and adding up to their brand equity. This has opened up new horizons for already booming mobile applications market and provides faster acceleration for the market.
The excitement around mobile applications is going to have a major impact on our economy, and our way of life.